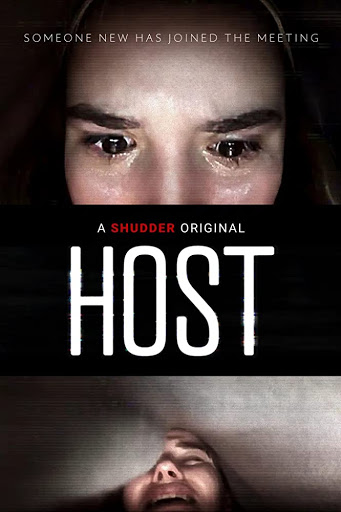 Well, if this little cyber-horror gem hasn't taken the internet and the horror community by surprise! As some of you might know, we're in the middle of a pandemic that has been wreaking havoc on the world this year and that has resulted in many people having to stay home and work remotely and hang out with friends the same way. When you can't be face-to-face with your fellow co-workers (LUCKY...just kidding...kinda), or have your fun boozy nights out, you resort to the 'ol internet with some good old video chatting. Host decided to employee the use of the newly popular Zoom as its base and say "Coronavirus got you down? Us too. Here's something to scare the pants off of you!"
Taking place currently during the pandemic, six friends jump on Zoom to have a seance. As you can imagine, things don't go well and an evil presence decides to join and wreak havoc on their night. 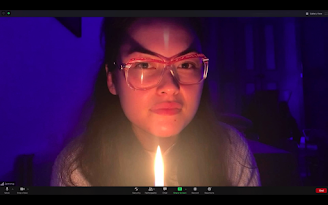 You guys knew it was going to happen sooner or later. We already had Skype horror with Unfriended, if there was any time to put something out as relevant as a horror movie strictly filmed on Zoom, it's now. And admittedly, I was initially hesitant when I first saw this pop up on Shudder a few days ago (it is a FRESH release) because really, how scary could it be?? Oh, let me tell you, it was scary! From what I've learned, the movie was adapted from the viral short by the same director and the actors who starred in the movie, (You can see the short here) and holy shit, even that made me jump! I did have to nervous laugh very loud so the people in my house didn't hear me also crying.

What sets this movie apart from the other cyber horror flicks and movies like Unfriended is how believable the characters were. You really felt like you were a part of the call and experiencing what they were. Every character had their own personalities that you were able to get a feel for in a short amount of time without any long drags in run time (when you're working with 56 min, you can only do so much). The horror aspects were great, too! A seance seems scary enough on its own in person, so you wouldn't imagine having one via video chat would be able to cause much damage, but Savage was able to do just that and give us some incredibly effective scares. The tension you feel with the characters in certain scenes as they're walking down dark hallways or using a selfie stick to investigate a noise in the attic is so thick, that when the jumps happen, and they do happen, they really work. Let me tell you, I will not be using any front facing filters any time soon!
Since Host is still only days old, I'm going to keep this short and sweet, but trust the hype on the internet on this one. It's relatable and it's scary as fuck. Oh, and I highly suggest watching it in the dark on your computer to get the full effect. Let me just say that I'm highly reconsidering my Zoom work meeting on Tuesday...
5/5
Streaming exclusively on Shudder
Watch the trailer below!
Posted by To Avoid Fainting at 7:33:00 PM