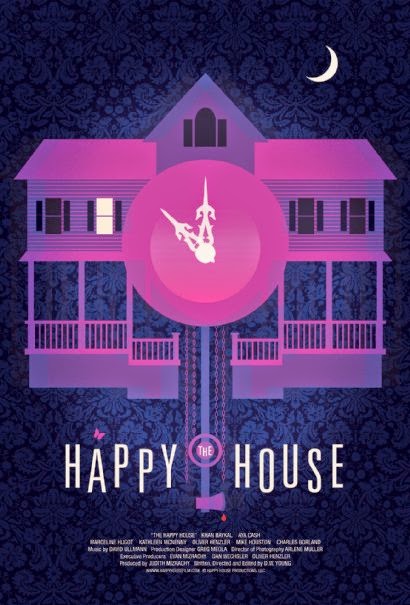 Today was a lazy Sunday as Adam had to be in the studio all day and I was left home alone.  Obviously that meant movies and reviews!  I did one of those "blind picks" on Netflix and landed on 2013's The Happy House directed/written by D.W. Young.  It seems that The Happy House is Young's first feature length film (using his directing skills on shorts and documentaries for the most part.)  Before watching I managed to catch a glimpse of a few of the Netflix reviews and let's just say, most weren't too pleased with what they saw.

Dawn of the Planet of the Apes review!

Once again I offered my writing services to Horror Movies Uncut in the form of a review for the newly released Dawn of the Planet of the Apes!

I attended the press screening this past Tuesday and was blown away!
Click the link below to read my review!

Dawn of the Planet of the Apes --- Horror Movies Uncut

Email ThisBlogThis!Share to TwitterShare to FacebookShare to Pinterest
Labels: dawn of the planet of the apes, horror, horror movies uncut, sci fi

Chris and I got together a second time to make a quick video review for 2012's Resolution.  Directed by Justin Benson and Aaron Scott Moorhead.

Follow Chris and Stacey at their respective Twitters for updates and to send us movie review suggestions!
WickdChris
+
Stacey-Beth
Posted by To Avoid Fainting at 3:10:00 PM 2 comments:

In case anyone that reads our blog is wondering why it's looking a little lonely, I promise we're still alive and well....ok, I don't think we've ever been well, but we're definitely alive!

Chris and I haven't forgotten about our horror blog love child but we've been hard at work with another amazing horror site, Horror Movies Uncut, lending our review writing skills alongside some pretty great folks who are bringing you the latest and greatest in indie horror news.
Below I've provided the links to all of the reviews Chris and I have contributed to HMU so far for your little eyes to feast on.  Give them a look and support horror!
Stacey-Beth reviews:

Go forth and read.  Watch movies.  And don't forget to subscribe to our blog with your email to the right of this post and receive notifications when a new post goes up!